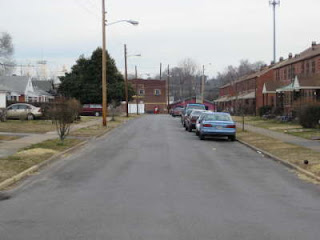 The picture at left, is representative of what Mr. Jack Pierce means, when he talks about the tranquility and quietness of Riverview. This picture from 2/17/07, is from the corner of Carver Street and Douglass Street, looking down to the Masonic Hall. Mr. Pierce has long lived in the house to the left, at the silver car.
MR. JACK PIERCE: I came to Kingsport from Old Kingsport that was three miles from Kingsport towards the Hawkins County area and we didn't buy property here. After I married, I bought a home here. I came to Kingsport in 1950. All my schooling was in Kingsport, so I guess it was in the early 1940's when I first come to the Old Douglass School (at East Sevier and Center Street). That's the only school I went to. When I first came to Riverview and started living in Kingsport, I lived with my sister on Carver Street, while I was going to the old Douglass. One of the most pleasant things (in Riverview) was the closeness of the families. All the families were real close and the older people helped raise the younger children. The parents got along real well and that was the part that you don't forget. Times have changed so much since then. The most unpleasant thing, I think, was the job situation. The Black people didn't even have paying jobs at that time, most jobs, the women did maid work, the men did janitor work, and at one time during that era at Holston Valley Hospital, all the maids were Black. You still had an education, high school or some college, you still got a job, you had to do janitorial work that was disheartening, really disheartening. Teaching jobs were low pay. The teachers at Douglass didn't make the money that the teachers made at D-B, and some of our teachers when school was out over the summer had to go work at janitor jobs to make it through the summer. Even our principal had to go to work at the Kingsport Press as a janitor. But, the most PLEASANT thing I saw was how people took care of their properties in Riverview and how they used to raise their kids. That went on right up until the 70's. People were interested in their kids, you had very few kids that were sent away. In Riverview, we had very few dropouts, most people if they got an education, they went on away where they could get better jobs because they were no jobs here for them. I remember the Roundhouse was the only building in Riverview. There was a pond over here, they used to take the cows over there to water them.
Posted by douglassriverview at 5:45 PM