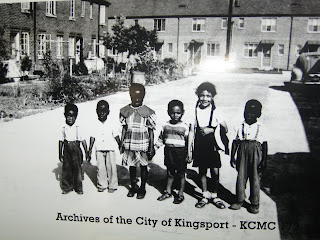 PHOTO AT RIGHT: Unidentified children pose for a picture in the Riverview Apartments.


MRS. HELEN BUNTING: I grew up in Riverview on Carver Street. I remember when there were dirt roads, and I also remember when the streets were first paved over with blacktop. When it would rain, we would play in that dirty water.. we would pretend we were swimming. Across the street from where we lived, there was a woody area and my youngest brother Eddie and my nieces Yvonne and Charlyne and my nephew Jimmy who are about my age, would play over there, catch tadpoles and pick blackberries. There were very few houses in Riverview. When my family came to Kingsport, they lived on Maple Street and they moved to Riverview when I was about four years old. My father, Willard C. Long, Sr., and my mother Ressie (Hoard) Long moved to Kingsport from Hawkins County, three of my brothers, Walter, Willard and Cecil and one sister Roberta, were all born in Hawkins County, and my sister Virginia was born in Virginia. My brother Eddie and I were born in Kingsport on Maple Street. The youngest sibling in my family, Charles, was born when we lived on Carver Street.. he died as a baby. I played mostly down in Riverview because that is where my nieces lived and in my backyard and front yard on Carver Street. We would play ring games, we would play jack rocks on the porch, we would draw hopscotch on the sidewalk, ride bikes and skate. I liked mostly everything about Riverview, even when the streets flooded because I liked playing in that dirty water. I didn't know it was a bad thing. The Underpath had a horrible ordor (people would use the bathroom under there and it would flood). We had to use the Underpath to go to Sunday School because our family belonged to Bethel A.M.E. Zion Church, and to get there from Riverview, you had to use the Underpath. When I was in first grade, I went a half-year of school at the old Douglass School, at the corner of Walnut (now East Sevier) and the old Bristol Highway (now Center Street). We still had to use the Underpath. After Christmas that year in 1950, I attended the new Douglass School on Washington Street (now Louis Street) in Riverview, and we no longer had to use the Underpath. After Sunday School, we would go to the movies and we'd have to use it, sometimes we would walk the tracks, which was really forbidden. When the Underpath was flooded, we would climb over and walk the railroad tracks. I remember walking down to Emmitt Collins' store to buy candy. I remember going to Paul Taylor's store to buy things. I remember going down in Riverview to the sprinkler, playing, going to the wading pool and on Wednesday night to watch movies., we would take a blanket to sit on. I think the reason they really built a pool in Riverview was because Johnny Hall drowned.. he went to the Holston River to swim and drowned. Another reason was probably so we would stay in Riverview at that time. We have some people from our community that because somewhat famous. Brothers Stick McGhee and Brownie McGhee. Stick had a song called"Drinking Wine Spo-Dee-O-Dee." Brownie played with Sonny Terry, he also wrote the sound track for the movie "Buck and the Preacher, starring Harry Belafonte and Sidney Portier. My sister Virginia's brother-in-law, Johnny Cartwright who's originally from Kingsport, played with Harry Belafonte's band for several years. Lesley Riddle of Kingsport was an African-American guitar player who directly influenced the (A.P.) Carter family. We had several black doctors.. Dr. Massey lived in the projects.. he had five kids and I played with his kids. There was Dr. Todd, he would come to our house, make house calls. There was a black woman doctor named Dr.Francis, and also Doctor Faust. Mr. Palmer was a coach at Douglass, helived on Carver Street and I played with his kids. During the month of July, the carnival would come to town and there was one night that was called COLORED NIGHT. The white American Legion would sponsor the carnival, but would let the Black American Legion have one night proceeds. Because my father was the commander of the American Legion and my mother was the president of the Ladies Auxilliary, they would take me to the carnival on that day. We would stay all day. The proceeds from that night's activities would go to the Black American Legion. The building where the American Legion had meetings and other activities was called "The Hut." There are good things that happened becuase of integration, we received a few more opportunities. The bad thing was, we lost part of our culture.They tore down the old Douglass Street (on East Sevier), the Black teachers lost jobs, the Black businesses are all gone, and the Douglass Yearbooks and trophies are all missing. Douglass School was named after Frederick Douglass and that school name is gone.. now there is Dobyns-Bennett, named after local white men.
Posted by douglassriverview at 10:36 PM