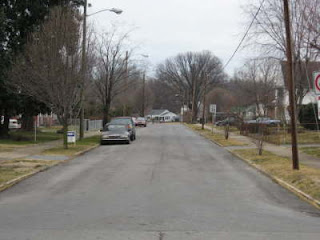 The picture at the left from 2/17/07, is taken from Lincoln Street, looking up Dunbar Street.


MRS. LILLIE SMITH: I tell you the truth, I never did like Riverview. I (would have) rather stayed on the other side of town, I didn't care for Riverview because I didn't know anybody, but it was my husband's idea to live over here. He said he didn't want to live anywhere else, so he built here and we have been here for 50 years, my children were born here, I guess I'll be here until I die. Riverview is my home now, at that time, I lived on East Sevier. But after I began to live over here, I love it. (When we first moved here), the projects and a little store down here, Emmitt's, were here. From East Sevier, we had to get here through the Underpath. Our house was first on Dunbar, then Mr. Alfred Smith. Mr. Smith built that house, his whole house lived in that house, Hattie Bell, Coil, he raised all his family in that house. The Stafford's (James and Ella) built their house long years after that as far as I know, it was open field, we had to fill in the yard with bricks, my husband had to dig out bricks, fill in and all that. It was very, very swamp; we had to have a sump pump in our basement because it was so damp, the water just stood. Byrd's was the same way (James Byrd, just up Dunbar Street). I think, who was that named Riverview, I can't give you that because somebody else, Cleve (Rutledge) might give you that name, Rome didn't know it? Seem like to me that had a history on that, something on who named this settlement over here. Bessie.. Bessie Hipps, that's who named Riverview. I can't say there was anything unpleasant, people were very thoughtful and happy and everything. You know, you had a neighborhood, it was very peaceful. It's so many gone, used to be a close neighborhood. You used to have Mr. Callahan and all them, aint' nobody here much, only Bud (Hickman) and his wife on this street. We almost all widows about, you know that. Lucille Flack is my oldest friend living now, I have seen every one of their children grow up, grandchildren, I saw Carolyn born, every one of them. Let's see, Dunbar, down on this end. Parthenia (Deal), our house was the first one, and (her) little house over there cross from me, that was the second little house, and I was so glad to see that house go up. You didn't have anybody down this way. I would get Betty Jo and Olivia and go across town, it was so lonely. Roads.. had dirt roads, not no concrete. I remember those big old trucks (from the "brickyard" traveling down Lincoln Street) coming and going all the time. The place where the swimming pool is, used to be the junkyard. They used to have cows across the railroad track. I didn't know anybody when I first moved over here,that's when I started to go to church and places like that, I met different people. Central Baptist Church was here when we built our house here.
Posted by douglassriverview at 5:40 PM