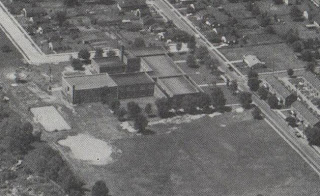 PHOTO AT RIGHT: Aerial view of Douglass School, 1963. Louis Street is running diagonally to the right. That's Wheatley Street to the left.
The junkyard is down in the lower left corner.

When I became aware of my surroundings as a child, Riverview was what I would consider country, with fields of weeds, wild fruit trees and all kinds of berries and swampy areas. What the children did for fun was explore, snakes and insects were plentiful and the boys had no fear, the girls loved to capture butterflies, June bugs and lightning bugs for school projects like science and biology. The families in the housing had flowers in their yards, they had bars, gardens, hog pins and chicken coops. They raised most of their food, canning was common, people also enjoyed hunting small game like rabbits and fished out of the Holston River. These were educated people, but the only jobs were janitorial and domestic work, unless you were a preacher or a teacher. There was interchange. The white citizens came to Riverview most of the time for business. There were peddlers selling their fruits and vegetables, the Dixie Ice Cream Wagon, the ice man would sell blocks of ice, and there was the milk wagon. I remember Nurse Sullivan from the Health Department would come and check on the children when they had contagious deseases like measles, mumps and chicken pox. I especially remember Mr. Bennett, one of many door-to-door salesmen. He sold household items out of his car from the Bennett Store. Most people had accounts with him, not to mention the insurance man. I could tell some hilarious stories about him. Sunday's, a photographer by the name of Ralph Lee took pictures. On Wednesday's, I don't remember the gentleman's name, but he would come to Riverview with his reel-to-reel projector, and as part of our entertainment, we would take our chairs to the middle of the field there in Riverview and he would show us movies. That was always fun and something to look forward to. The community was blessed with talent. We had tap dancing contests, the guys would do a rhythm dance called the Hambone, beauty contests, talent shows, music festivals and quartet singing, and of course sports events and a lot of church events. The main fundraisers were fish fries, bake sales and donations. Our school pride soared when they built the new Douglass School in 1951. Our principal, Mr. V.O. Dobbins made us take care of it. We were proud to have people like Mahalia Jackson and Wilma Rudolph come to our school for special events. We had some of the best teachers in town, who not only taught the curriculum, but taught us about people and how to get along with others. They didn't mind correcting you, and respect was a must. In the latter 60's, integration was gradually taking place, and there were a lot of first's. The first Black store clerk in town, Linda Lee Cox worked at Fuller and Hillman. The first store to open lunch counters to African-Americans in Kingsport was the F. W. Woolworth's. That was the first lunch counter that we could go and sit down and eat with no problem.
Posted by douglassriverview at 6:10 PM