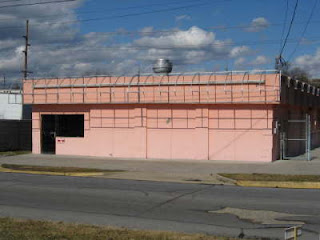 When I first saw the Riverview Community, I was living across town. My husband (Jason Taylor) and I drove over to the community. There were only four houses over there and street names had just been assigned. Riverview was divided into four streets eastward: Wheatley, Louis, Carver and Dunbar. I remember three houses being on Dunbar, Mr. Nelson Smith, Mr. and Mrs.Nathan Byrd, and Mr. and Mrs. Jim Stafford's. In 1945, Jimmy Quillen had built two duplex apartment buildings on each street. We moved to Riverview in 1945, after we built our house. The school and the project housing were built about the same time. On Dunbar Street in 1945, Jason Taylor's house, Mr. Dobbins, Mr. Sneed and his sons, Mr. Preston Collins and Mr. Alfred Smith lived here. The rest of the neighborhood was built later. Mrs. Bessie Hipps gave the community the name Riverview because the river could be seen, so she said. Actually, the river was on Industry Drive below Riverview. Paul Taylor and Mrs. (Cora) Cox had a dry cleaning business and a grocery store and Midway Grill, an eating place. The people from the brickyard ate beans there every day. Mr. Emmitt Collins had agrocery store, too. JasonTaylor built the Dairy Mart where milkshakes, sundaes and hot dogs were sold. The swimming pool was open and very busy. Rev. Edge had a store where hamburgers and hot dogs were sold to the school children. Mr. Hodgehad a coal business, that Oscar McClintock later turned into a barbershop. Mr. Horace Curry turned his building into a mortuary, and now it's Robinson's Funeral Home there, beside the Elk's Lodge. At the time, the pleasant part of Riverview was Cement Hill before they started digging. It was like a nature sanctuary full of birds, wilderness and woods. We enjoyed the wild apples, strawberries and blackberries. The young children used to play out there.. Helen Stafford (later Patterson),Virginia Phipps and Nathan Bly were children back then. Riverview began to grow after people built houses on the lots they had purchased. The unpleasant part of Riverview was the dumpsite, where the Eastman Credit Union is standing today (on the other side of Wilcox Drive). I was pleased to get the swimming pool in the community back in the1950's. Mrs. Cox had a store in which we had the Boys Club meetings. Mrs. Leola Allen started the Women's Service League at Rev. Edge's store. She also started up a YWCA for women who came from out of town to stay, while they worked. This was part of the Women's Service League's functions. The Dairy Mart was located where the old 229 Club is now. Riverview also had four African-American doctors at that time. They were Dr. Francis, Dr.Faust, Dr. Todd and Dr. Massey.
Posted by douglassriverview at 6:44 PM