PHOTO AT BOTTOM: An aerial view of the Riverview Apartments, 1963. Lincoln Street is at the bottom from left to right, Louis Street is the street on the left, Carver Street on the right, and Douglass Street at the top. After living there for several years, O.M. and Ann Gillenwater 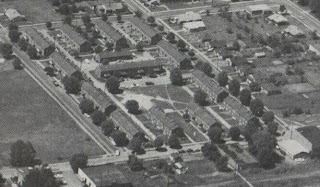 eventually moved into the house at the top, just left of
center.


O. M. GILLENWATER: Riverview is not like it used to be. Everybody was neighborly, but now you can't trust everybody. We lived in Riverview Apartments #12, and that was Carver Street, but there was no street, it was nothing but field. When I came back from the service, there was a drive-in theater. The drive-in was right over there where Buntney (Nathan) Bly lived, Buntney and Nathan Harris both had houses over on that side (of Wheatley Street). Back in those days, you'd just go to anybody's house and you were welcome as far as that goes. If somebody would have something for their children like a birthday party, you could go uninvited, everybody's welcome, out in the yard, have a picnic out in the yard, backyard, front yard, whatever, and you could leave home and not worry about anybody going in.

ANN GILLENWATER: When I came to Kingsport, (Emmitt) Collins had the store, Paul (Taylor) had the restaurant up the street, that was the only place to go until the Edge's came and put in a restaurant and he had rooms upstairs. Children had somewhere to go to eat hamburgers and sit and listen to music. Rev. Edge died in 1985, the restaurant went down, there wasn't no where the childeren could go, unless they could go to town to loiter awhile. Rev. Edge, he would show Christian movies and everything, and he would have something at the Masonic Hall at Christmas. Rev. Edge would give the children a party down there, he would furnish everything himself and he would need help, I helped most of the time. He would have homemade ice cream, and keep the restaurant open on Sunday evening for them. I neverhad any problem with, but one of them. We got along good with the children, REv. Edge would tell me "you'd better watch (name deleted)." I said "OK, I don't worry about (name deleted." (In Riverview) I lived down in Apartment 40, the streets were not paved and the gravel roads, people would get out there and speed up and down there, you couldn't sleep for that noise that they would make on those gravels. I didn't have a car, so driving was no problem.

ANN GILLENWATER: You could ride a cab for 25 or 50 cents.. The price now, I would be afraid to call one now.

O.M. GILLENWATER: Right there where the church (Central) is now, I used to hunt all in there. Me and Dewey Long hunted all the time, up, plum up to the Brickyard. Before the pavement come around, they used to have hog pens, and I would go when the time come, I'd get my little 22 and go out and shoot 'em. It happened right down across the street from the Holiness Church. There used to be a woods over there by the school (the newDouglass), before Eastman bought in there, that's where the pond was. There used to be a branch, run right down through this way. I would set my dogs in there where the junkyard was, the rabbits would come down through there and I would shoot them. All that used to be woods and the junkyard right over in there. The house where we live now, Mr. Adams built this one. Woods were the first people to live here, then Palmers, then Ruffins. They rented from the Adams, Ruben was their boy's name. Mr. Palmer was a coach at Douglass High School.

SPECIAL NOTE: O.M. Gillenwater passed away shortly after recording his oral history for Discovering Our Community. His testimonial above is in tribute to his memory by all Douglass alumni.
Posted by douglassriverview at 6:20 PM