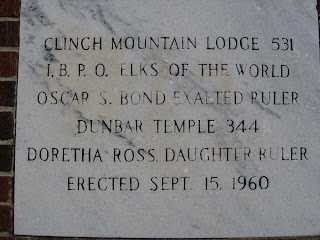 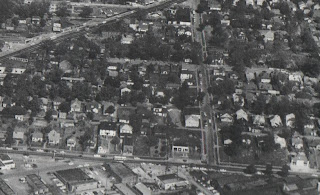 PHOTO AT RIGHT: This is a 1963 aerial view of the Oak Street District where African-Americans had settled and were being crowded into. The diagonal road upper left is Center Street (the old Br istol Highway), the street left to right at the bottom is Sullivan Street (the old Kingsport Foundry is at the bottom), the next street up is Dale Street, and the next street up is Maple Street.

PHOTO AT LEFT: The cornerstone plaque showing where Mrs. Ross is the Daughter Ruler of the Elks Lodge, Riverview Chapter.

MRS. DORETHA ROSS: Before Riverview, as a child of four, my family moved to Kingsport from Newport, Tennessee. The Depression had just begun, and my father came on Sullivan Street and opened a restaurant on the corner of Sullivan and the old Bristol Highway (now Center Street). He had to discontinue the restaurant because people didn't have money to buy food. Black folks lived on Sullivan Street. It wasn't Sullivan Street then, but that's where they lived. We moved to East Sevier, it was Walnut Street then, and lived there until I was 12 years old. My family moved to Gate City, Virginia in 1937, because my mother had asthma. Her doctor said that Kingsport was not a good place for her to live because it was so damp and there was so much smoke in the air from the plants. I continued to go to school at Douglass, though. Before we moved though, our neighbors were the Hickmans, the Jason Taylors, the Henry Hayes, Buster Hale and the Smiths. Rev. and Mrs.Whitley also lived there. They were well known because they always had their sign that said, "it suits us." Mrs. Whitley said that everybody was always trying to tell them what to do, and they fixed everything up and putup the sign "it suits us." The Whitleys were the homeowners. They had houses that they rented, along with Mr. Gaither who was from Asheville that owned a lot of the houses for rent on Walnut Street. And Mr. Will Dykes, who collected the rent for some. The Hills lived next door to us, and the Davis's and the Stacy's both lived across the street. The Savoy Grill was on Center Street, which we called the Old Bristol Highway. And there were apartments over the buildings, and there were four or five brick buildings that housed the restaurants, the poolroom and barber shop, the Kingsport Provision was on Center Street, that was a food place. The Whitley's pastored a church, a little storefront church right there on Center Street. All of our activities were always at Douglass School, because we had the playground. The kids played on the playground on holidays, the Fourth of July, Eighth of August and what not. We just played up and down the streets. We had roller skates and the streets were paved, so we'd skate up and down the road. We had no supervision, playing like we do now. When people moved over to Riverview, they tore down some of the houses in the alleys (along Dale, Maple Oak and East Sevier). Most of the people that were in the alleys moved over to Riverview, but the folks who owned houses on the front sides stayed there. Lee Apartments (back then) was in the Black Neighborhood, but we didn't call it the Black Neighborhood. When you came to where Jill Ellis lives,that's about as far as the blacks went. To us, that was white people who needed (the apartments) then. Actually, I never did live in Riverview. I went to Riverview every day because I was an insurance agent. I sold North Carolina Mutual Insurance, the largest Black insurance company in the U.S. I collected insurance (premiums) from the people who lived in the housing, and we had lots of clients. I was there, (patronizing) the businesses, the restaurants, going into the Elks. My name is on the cornerstone of the Elks, not the first one, but the (1960) one that is sitting there now, because I was their daughter ruler (see picture above). They built the Robinson's Funeral Home (it was Curry'sFuneral Home back then), and then there was the Masonic Hall and the American Legion. There was the Esquire Club. Paul Taylor's Grill and Grocery Store in Riverview and Rev. Edge's was down on this end and they built the swimming pool. Like everything else, you had different people at different levels that took part in politics. Mrs. Inez Ervin was (active) in the Democratic Party. She and Mrs. Stacy were also over the nursery, that the Community Chest gave money for it, and they would always have this revival at the Civic Auditorium. Things were rough during the Depression. Blacks at the (Kingsport) Press were in the union with whites. The union took everybody in. When they struck, the Press broke the Union and everybody lost their jobs,including the Blacks. The Press hired new non-union workers, and many people had to leave Kingsport because of it. The year I was in the Douglass PTA, we bought the PA system at Douglass. The man who ran Dobyns-Taylor (Hardware) was very good at donating things to Douglass. I never did go to the school board. They didn't have the money. If you don't have the money, you can get the money. It was never equal, because you never got the same thing ) as Dobyns-Bennett). Just like Douglass would have to try to get uniforms. Dobyns-Bennett was a lot different. There was always the struggle to keep things in place. After Kingsport integrated schools, our kids could have gone on (to the white schools), but our system decided to keep them here. You see,Virginia was paying for them to go to Douglass, and my children were the first Black ones to go (to Gate City). A lot of the black Douglass teachers lost their jobs, but a lot of them just left. They saw what was coming along, and they just left, went on to other places.
Posted by douglassriverview at 5:20 PM