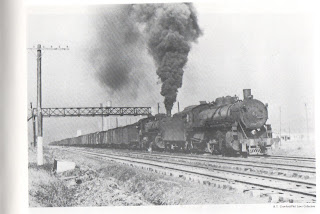 PICTURE AT LEFT: In the background is the former railroad trestle that Ruth Russell used when she and other black children needed to cross the Clinchfield Railroad track from Cement Hill many years ago. The trestle which is long gone, was located just south of the downtown railroad station, right behind Citizens Supply on Main Street.


ETHEL RUTH RUSSELL: I used to live on Sullivan Street, and they had names around there like Black Bottoms and Cement Hill. I was born on Cement Hill. My grandfather and grandmother, they come from South Carolina. We moved from Cement Hill to Sullivan Street to Riverview. A lot of times on Main Street after we left Cement Hill, I walked to school some, and we had to go over a railroad trestle. Of course, I was afraid of that trestle, so I would crawl under the box cars. Over there on Main Street, Jason Taylor owned a dry cleaners and my uncle worked out front and he shined shoes there. After we moved to Riverview, we lived at Apartment 46, Louis Street (formerly Washington Street), and I can remember there wasn't no grass or nothing out there. The first telephone that I remember anybody having in Riverview was the Gillenwaters, and I guess we kept her busy answering doors using the telephone. But then, I remember we used to go where Douglass School is now, and there was nothing but blackberries and trees. We used to go out and pick blackberries and just had a good time, just had good clean fun. And I can remember they turned on the sprinkler in the summertime in the middle of the field, so we would all go out and play under that. We didn't have too much, but what we did have, we enjoyed it. That was a glorious time when the man would bring his reel-to-reel movie projector to the field. I can remember Central Church, but I never went to Central because Florda Lyle that raised me, most of the time she was at the Holiness church, they had a Holiness church over there (in Riverview), but later on when I made up my mind where I wanted to go, I went to what used to be the Walnut Street Methodist Church. I moved from Walnut Street, which because St. Mark Methodist Church, and now it's St. Mark's United Methodist Church. I have been at St. Mark ever since. You know, say it takes a community to raise children, and that's the way Riverview was in those days. My mother was somebody else's mother and they kept their eyes on children, we didn't have to worry about drugs, we had nothing to worry about. It was safe; Riverview was a safe place community. I remember when the roads were dirt before they were paved. We just played, just played around in it and barefooted. And we had some good people in those days, we had real good people. I remember Paul Taylor, he had a dry cleaner and Midway Grill and he had part in the funeral home. Ben Swann came later and of course, Rev. Edge came later, too. But before Rev. Edge, there was Nathan Byrd, he owned that restaurant down there before, I don't remember the name of it. I remember the Elks had a club there, it was the American Legion and Masons. Mr. Emmett Collins owned a grocery store. We also had a beauty salon that was run by Ms. Ethel Walton Daniels. The old Douglass, as we call it, we had real good teachers in those days and I can remember Ross N. Robinson was our superintendent. I also remember that black kids that went to Douglass, got to play up there at J. Fred Johnson Stadium on Thursdays. We had pretty good basketball teams, I played basketball. Riverview was a great place to live, it wasn't no slum. The way things were then, we were lucky to have a place to live at all, so (sometimes) we had to take a handout, and we were very grateful for what we got. We had to walk, in order for us to get to school (Douglass was located on Walnut, now East Sevier) unless you had a car, and if you didn't, you had to go through the Underpath. A lot of times, I don't think they ever had a light under there, especially if you come through at night. There was a little red store bythe foundry, we used to go in that store a lot, and even if we didn't have money, the people were always giving us something, always giving us something. Those were the days.
Posted by douglassriverview at 5:15 PM