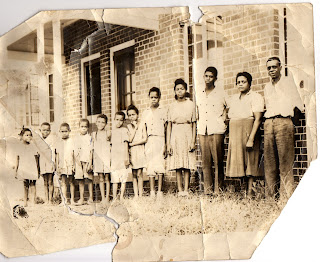 Riverview Oral Histories #1: Mrs. Eula Cartwright Leeper
PICTURE AT LEFT: The Kingsport Housing Authority wanted a picture of the Cartwright Family when they moved into the Riverview Apartments, and only five of the Cartwright children were present when the photographer stopped by. Parents Eula and Thomas Cartwright rounded up five other children in the neighborhood to complete the picture.
EULA LEEPER CARTWRIGHT:My name is Eula Leeper, and I have lived in Kingsport all of my life. I was born in Kingsport, and we used to live on Oak Street in the Todd Apartments.When they built the Riverview Apartments, they had built the apartment we lived in especially for our family, so that meant the girls would finally have a bedroom and the boys would have a bedroom. We all had a bathtub with running water, because the Todd Apartments didn't have a bathtub. You had to pour the running water in a tub. We had a big family, but we always had plenty of everything, and Riverview was a nice place. They had recreation for the children, and the recreation people would come over and show a movie and have baseball. There was no pool, but they had a sprinkler that they would turn the water on, and everybody was just real friends. The young folk were real nice to the older folk, and the older folk were nice also.Eula Cartwright Leeper
Posted by douglassriverview at 2:46 PM